Kentucky’s Move Over Law and the Risks of Ignoring It 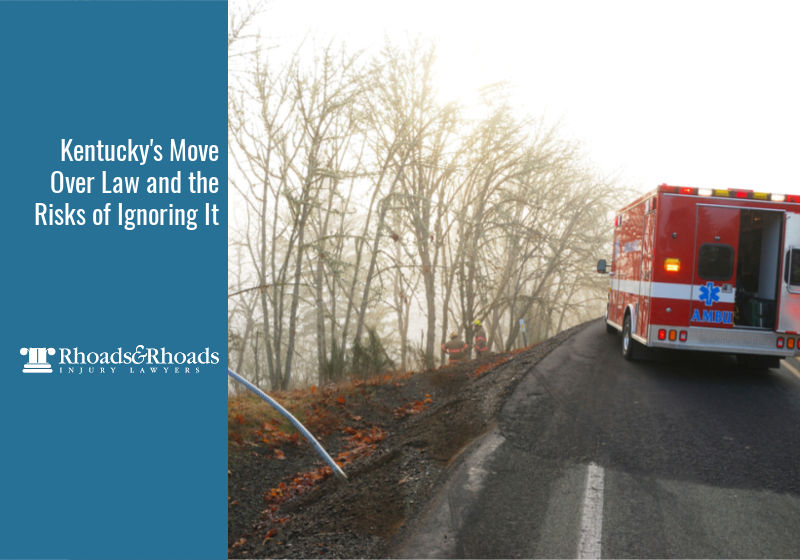 First responders face risks to their health incredibly frequently. They put their lives on the line to protect and help others, and many are killed every year in accidents and deliberate violence. One notable source of injury and death results from irresponsible drivers failing to operate their vehicles safely while first responders are parked on the side of the road. Kentucky has an important move over law that aims to protect first responders, but many Kentucky residents are unaware of these laws or choose to ignore them entirely.

Whether you’re driving through Kentucky or any other location, you need to operate your vehicle with extra caution when passing a parked vehicle, and you need to change lanes away from the vehicle if possible.

What You Need to Know About Kentucky’s Move Over Law

Every state has a version of the move over law, and the only area of the United States that doesn’t is the District of Columbia. Kentucky implemented its move over law in 2003, but many Kentucky residents are completely unaware of its details. The Kentucky move over law states that drivers need to change lanes if there’s an emergency vehicle on the side of the road if it’s safe to do so. You’re supposed to switch lanes away from the approaching emergency vehicle to reduce the chance of hitting the parked first responder. If you’re unable to change lanes or if there’s only one lane available, you need to slow down.

Vehicles that qualify for the Kentucky move over law include first responders, such as police officers, firefighters, and emergency medical technicians. In addition to first responders, Kentucky drivers are also supposed to change lanes or reduce their speed when approaching a tow truck parked on the side of the road.

Although Kentucky drivers should be aware of the move over law, many are oblivious to it or ignore it. A national survey poll conducted by Mason Dixon Polling & Research found that 71% of Americans have never even heard of move over laws even though almost every area of the country features them. A survey conducted by AAA found that 90% of first responders have had drivers almost wreck into them while they were on the side of the road. 70% stated that drivers do not move over or slow down.

The survey conducted for AAA workers contradicts a different AAA survey. AAA had a poll in which the majority of drivers claimed they changed lanes or slowed down for emergency vehicles. 90% of those polled stated they acted cautiously when approaching a parked emergency vehicle, but the first responder survey and poll conducted by Mason Dixon Polling & Research indicate that this is likely not the case.

Even if you’re unable to change lanes for a first responder or tow truck, you need to reduce your speed to ensure the safety of others. Failing to move over or slow down can have fatal repercussions.

The Consequences of Ignoring Move Over Laws

When drivers fail to move over or reduce their speed for first responders and tow trucks, they needlessly risk others’ lives and their own. In 2005, 390 emergency responders were killed on the side of the road by drivers who failed to operate their vehicles safely. The number of fatalities made up 7% of domestic emergency responder deaths that year.

If possible, you need to change lanes away from disabled vehicles, tow trucks, and first responders, but at the very least, you need to slow your speed and drive cautiously. Failing to do so can lead to life-changing injuries or fatalities.

If you were injured in a car accident, you need to receive the damages you deserve for your vehicle, medical bills, and lost wages. Holding the negligent party accountable can often be difficult, especially while you recover from your injuries. You need expert legal guidance to ensure you receive just compensation. For assistance across Kentucky, contact Rhoads & Rhoads Injury Lawyers. We’ve helped countless Kentucky drivers like you receive the damages they deserved, so call 888-709-9329 or click here for a free initial consultation.