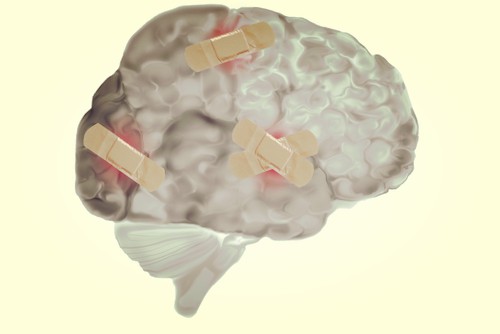 Traumatic brain injury (TBI) is the result when the brain is damaged by an external physical force. This definition includes bruises or contusions, penetration of the brain by a foreign object, and diffuse-axonal injuries, a tearing of nerve tissues in the brain that occur when intense motion of the head prevents the brain from keeping up with the movement of the skull or body (such as in Shaken Baby Syndrome). Brain injuries caused by degenerative disease or those present at birth are not usually classified as TBIs. TBIs are incredibly common injuries, with severity ranging from mild to severe.

A majority of traumatic brain injuries are caused by some kind of accident. Auto accidents, for example, cause almost a third of all TBIs resulting in death. When auto accidents and falls are added together, the two comprise the cause of over half of all traumatic brain injuries. As personal injury lawyers, the attorneys at Rhoads & Rhoads have worked with many clients and families who have been affected by traumatic brain injury caused by the negligence of another person. We know all-too-well the catastrophic impact of a serious injury to the brain and the lifelong medical and therapeutic needs of a TBI survivor. The needs of victims and their families, however, can vary greatly dependent upon the severity and type of brain injury.

Mild TBI can be incurred without the individual even realizing they have injured their brain. Though someone sustaining a mild TBI may lose consciousness very briefly, they may not. Instead they may appear temporarily dazed or confused. With mild TBI, this initial phase is likely to be very short but followed by memory or concentration difficulties, severe mood changes, depression, headache, nausea, vomiting, fatigue, or sensitivity to light or sound. If symptoms don’t last long or are mild enough that daily activities are not impacted, the injured person may not even seek medical assistance, which is a mistake. These days, the medical and sports communities are learning that even minor concussions, if repeated over time, can cause devastating deterioration of the brain.

It is nearly impossible to ignore the symptoms of moderate and severe TBI, though with moderate TBI, the injured individual may experience symptoms similar to mild TBI initially. These symptoms will worsen drastically and quickly. When a moderate or severe TBI occurs, the person usually loses consciousness for several minutes or hours and experiences a constant and quickly worsening headache. Common additional symptoms include convulsions, inability to wake, loss of coordination, serious confusion, agitation, and speech difficulties. Coma and death are possible.

TBIs are usually a result of closed head injuries and require expert medical attention for proper diagnosis. No one should ever ignore the symptoms of a brain injury, no matter how mild. If you or someone you love sustained a traumatic brain injury as the result of a car accident or fall caused by another person’s wrongdoing, the brain injury attorneys at Rhoads & Rhoads are ready to fight for you. Call us today for a free initial consultation at 1-888-709-9329.