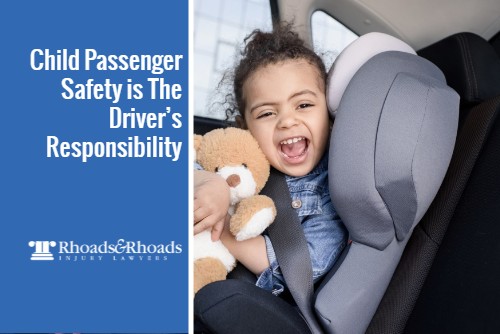 On average, nearly two children under 13 were killed every day in 2017 while riding in cars, SUVs, pickups, and vans. Many parents may feel overwhelmed by hearing those statistics regarding child passenger safety, but they shouldn’t feel helpless. The National Safety Council (NSC) along with the U.S. Department of Transportation’s National Highway Traffic Safety Administration (NHTSA) are busy launching campaigns this season to let everyone know that about every 30 seconds in our country, one child riding in a passenger vehicle will be involved in an automobile crash and there are things drivers can do to lessen their child’s risk. Many times, these serious injuries and deaths could have been prevented with the proper use of car seats, boosters, and seat belts.

Take some time to review these critical facts provided by the NHTSA that show just how important the issue is.

Drivers who choose to operate responsibly by staying sober, avoid distractions and respect traffic laws are doing their part in keeping roads safer for young passengers as well.

Research led by the American Academy of Pediatrics sparked monumental changes in U.S. child car seat guidelines back in 2018. With new, updated guidelines focused on keeping children in rear-facing car seats until they reach the height or weight limit for the seat, the guidelines also say:

Again, children should remain in rear-facing seats until they reach the highest weight or height allowed by the seat manufacturer. For several years, the annual Safety Belt Usage Survey in Kentucky has provided data showing that Kentucky parents are getting better but still not using child car seats and seat belts correctly.

In 2017, among children under 5, car seats saved an estimated 312 lives, and a total of 371 children could have survived if they had been buckled up 100-percent of the time, according to NSC. Child injuries or deaths related to safety seats or seat belts occur when these suggested safety tips are ignored:

Take advantage of car seat safety events held by Child Passenger Safety Technicians in Kentucky year-round or schedule an appointment with one. Parents and caregivers should ask questions about how to choose the right car seat for a child’s age and size, how to correctly install the seat in their vehicle, and how to use that seat correctly every time.

Speak with an Accident Lawyer About Your Child’s Injury

If your child has been injured in a motor vehicle accident and you believe it was caused by the actions of someone other than yourself or by a defected safety seat or feature in your motor vehicle, don’t hesitate to call us. All you need to bring with you are the accident facts and your trust — we are here for you and your family and will handle the rest.

Also read: What to Know About Whiplash Injuries