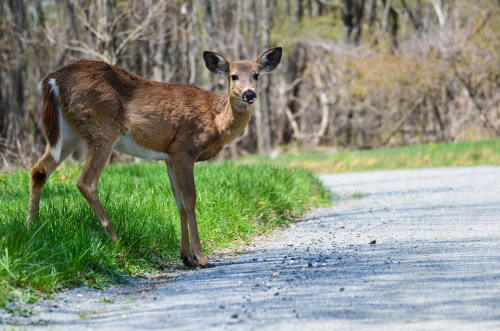 Herds of deer are making their move this month and already the cause of a traffic fatality in Ohio County. Kentucky State Police report a 37-year-old man was killed in a weekend crash after he tried to avoid hitting a deer but instead lost control of his vehicle, hit a tree and was thrown. The man was driving north on Mine Fork Road in Ohio County and unfortunately not wearing his seatbelt. Our thoughts are with his family and friends during this difficult time. Our attorneys were glad to hear no other passengers, pedestrians, motorcycles or vehicles sharing the road were involved. Deer swerving accidents too often trigger secondary events and crashes that leave more than just a deer, or other road-crossing animals, deceased or seriously injured.

Leading insurance companies report about 1 in 100 Kentucky drivers will hit a deer, well above the national odds of 1 in 162. In addition to causing damage to vehicles, deer contribute to more than 100 injury crashes and about three highway fatalities in Kentucky each year.

Though many DVCs result in minor injuries, others can be catastrophic for those driving (or riding in) passenger vehicles, trucks, and motorcycles. Perhaps the greatest danger comes from many drivers’ instincts to swerve to avoid the animal. When this happens, the vehicle’s operator can easily drive off the road and hit a tree, or worse, swerve into oncoming traffic and create a secondary wreck that could leave them liable.

Secondary crashes are accidents that occur in some part due to a prior crash. It is not unusual for a secondary crash to involve more than two vehicles, as a chain reaction can easily cause a multi-vehicle accident when traffic is congested. The Federal Highway Administration’s Office of Safety defines a secondary crash as “an unplanned incident for which a response or intervention is taken, where a collision occurs either within the original incident scene or within the queue resulting from the original incident.” Other definitions may delineate the time or distance from the initial accident a secondary incident must occur in order to be considered a secondary crash. Either way, these accidents can be deadly or cause lifelong disability for those involved.

Crashing into a fixed object or suddenly hitting another vehicle head-on will almost always result in more serious injuries, such as internal bleeding, traumatic brain injury, head injury, spinal injury, and even death.

It’s a good reminder to be especially alert and drive with caution when you are moving through a known deer crossing zone but also during the high deer crossing months of October, November, and December. These times typically drive more deer across Bluegrass roadways than any other time due to the cooler nights and shorter days that ignite the start of the mating season. According to the Kentucky Transportation Cabinet, these months also account for more than half of all reported deer-vehicle collisions (DVC) each year. Be sure to drive with extra caution, and a bit slower during early morning and early evening hours. These are the times when visibility is low, and deer are most likely to be on the move. Kentucky State Police offer these safe driver tips to help improve road safety of all users during the heavy DVC season:

If you can’t avoid a collision with a deer (or other animal) and a secondary crash was triggered, call for help immediately. Let authorities know if the deer is blocking traffic or the crash posed a threat to other drivers and secondary accidents have occurred. The collision may result in serious injuries and fatalities or costly property damage. Those involved may need to fill out an official report to support any claims that will be made.

If you find yourself in the position of being seriously injured, we can help ensure you receive the compensation you deserve from the insurance company. With offices in Owensboro and Madisonville, Rhoads & Rhoads represents car accident victims throughout Western Kentucky. Contact the team of experienced DVC attorneys at Rhoads & Rhoads if you have been involved in an accident that resulted because of a DVC.

We offer free initial consultations, and all cases are taken on a contingency fee basis, and that means there is no payment required up front. Call us at 888-709-9329 or contact us by e-mail to schedule an appointment with one of our Madisonville or Owensboro personal injury attorneys.