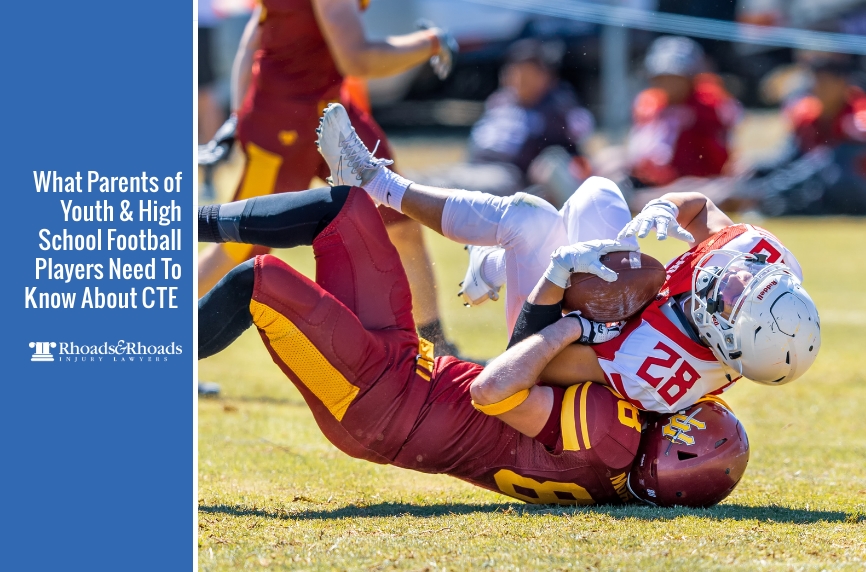 High school coaches, youth football league organizers and medical teams have been pushed to help reduce concussion rates as research is connecting head injuries to chronic traumatic encephalopathy (CTE). CTE is a degenerative brain illness linked to the deaths of past high school, college, and professional football players and other athletes who play contact sports. The incurable disease is caused by brain cells depleting after repeated concussions or traumatic brain injuries (TBI). CTE can become fatal as it alters a person’s rational thinking and creates a higher risk for suicide, addiction and risky behaviors.

A CTE diagnosis can only be made by studying sections of the brain during an autopsy, but early on-set symptoms can present years to decades after head trauma occurs, including:

Mayo Clinic recommends preventing CTE by minimizing the amount of mild traumatic brain injuries an athlete is exposed to and reducing additional injuries after a concussion by allowing an injured brain to heal.

How to Keep Young Athletes Safe from Chronic Brain Injuries

Parents and coaches should be educated on the symptoms of severe and ongoing head injuries and recognize the importance of seeking medical help as soon as possible to ensure the right diagnosis and treatment. If a young athlete does exhibit any symptoms, a head injury should be suspected, and the player should be removed from practice or a game, parents should be notified, and the athlete should not return before being evaluated by a licensed health care provider and a written clearance completed.

Sometimes, in addition to a concussion, players may have a combination of serious injuries to the brain, such as:

If your child receives a blow to the head while playing any sport, even those less commonly known for brain injuries such as soccer, gymnastics, hockey, cheerleading or baseball, seek medical attention immediately and provide an adequate amount of time for them to heal before allowing them to play again.

The personal injury issue with young athletes who sustain head injuries is that many districts or recreational league coaches downplay the known risk or mislead parents with a false commitment to player safety. Also, too many youth football groups refuse to adequately protect their players and instead place children in old, unfit or damaged gear. These groups have a duty of care to make the activity reasonably safe for all participants and lessen the injury risk involved.

At Rhoads & Rhoads, we are big supporters of organized sports and sponsor and coach many youth teams throughout the year in Owensboro. Keeping kids healthy through activity and sports is important, but so is entrusting your family in athletic associations and groups who choose to adequately protect young players. We remain hopeful that parents and coaches will use these reminders to be proactive and help create an incident and injury-free season for their young athlete and other team players this season.

While most youth sports do come with some risk of personal injury, we hope the benefits of participating still outweigh the risks for the vast majority. However, sometimes coaches, athletic staff and even physicians will allow a seemingly ready athlete to return to play before fully healed. If your child has endured a serious injury or fatality because of their participation in a school supervised sport, and it was caused by negligent, reckless, or intentional acts (or failure to act) of a youth recreational league, the wrongdoers can be held accountable.

Also read: A Lifetime Commitment to Our Community