Home / Blog / Is It Common to Have Delayed Pain After a Car Accident?

Is It Common to Have Delayed Pain After a Car Accident? 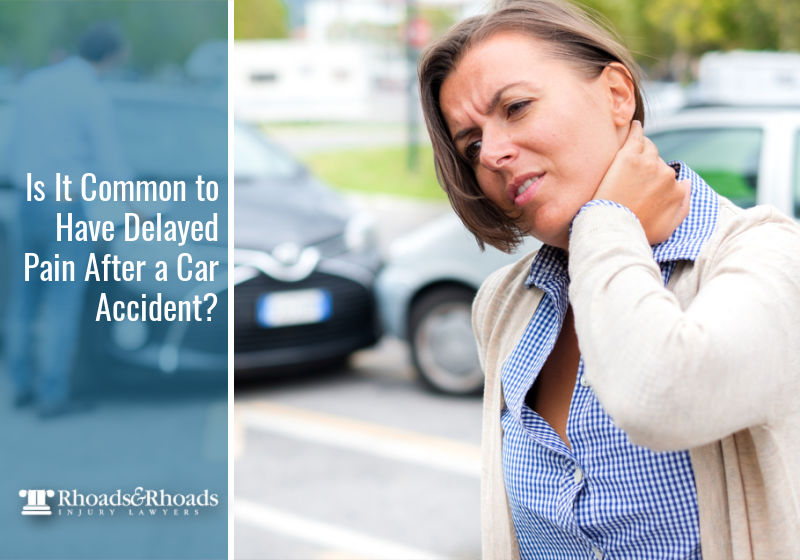 If you are a sports fan, you probably remember many stories of athletes who were badly injured during important competitions, but who finished the game, despite their broken leg, dislocated nose, separated shoulder, or ruptured spleen. How can someone disregard so much pain? For the same reason, you may have waved off the paramedics and insisted on going home after your car accident: they simply didn’t feel it.

Why don’t we feel pain immediately after an accident?

When someone experiences the physical trauma of a motor vehicle accident, their body deals with it by releasing adrenaline and endorphins; both of these hormones play a role in temporarily delaying the pain.

This is a medical condition that can happen after physical trauma. The blood pressure plummets and the blood vessels constrict. Simply being in shock is a medical emergency, since not enough oxygen and blood are being delivered to your organs. Shock may also prevent you from being able to feel pain, so you may not realize the extent of the rest of your injuries until you have recovered from this serious condition.

If you have tissue damage after an accident, you probably won’t feel it for several hours or possibly even days. This is because it takes the body some time to send white blood cells, inflammatory cells, and cytokines to remove the damage and begin the healing process. This acute inflammatory reaction will cause delayed redness, swelling, bruising, and soreness.

What does this mean to you?

It means that immediately after being involved in a car accident you may have no idea how seriously you have been injured – or indeed if you have been injured at all. It means that you should always get checked out by a medical professional, even if the accident did not seem to be particularly serious at the time. (Countless studies have found that it is possible to experience whiplash, spinal damage, or other injuries in low-impact collisions.)

In many cases, those who have been involved in a crash do not realize the extent of their pain and injuries until several hours, days, or weeks later. In other cases, it may take months for an injury to be identified and diagnosed.

If you have found yourself to be more profoundly injured than you realized immediately after your accident, you will want to seek legal advice from an experienced Kentucky car accident attorney. You have two years after the date of your accident or from the date when the PIP reparations ceased in which to file a personal injury lawsuit, according to the Kentucky Statute of Limitations 304-39-230. It goes without saying that it is crucial for you to be able to seek fair compensation for your injuries, but it is even more important that you act quickly to prevent worse injuries or even death.

Your pain may be delayed after an auto accident, but your actions should not be. Seek medical attention as soon as possible. And call the Kentucky car accident attorneys at Rhoads and Rhoads at 888-709-9329 to schedule your FREE legal consultation today.