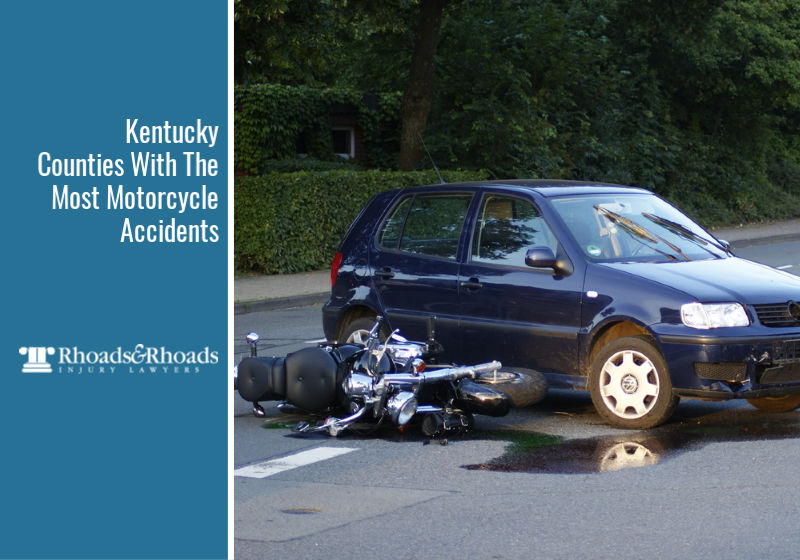 Highway safety officials agree that lack of skill, as well as driving above the speed limit, and inattentive drivers of non-motorcycle vehicles, are major causes behind the escalating rates of fatalities and injuries involved in motorcycle accidents across the Bluegrass.

The top 40 counties in Kentucky for most accidents involving a motorcycle include:

Learn more about the people we help and represent in Muhlenberg County.

Understanding the Causes Behind Most Motorcycle Accidents

Safe motorcycling that involves proper road and bike knowledge, including training, balance, coordination and sound judgment are just as important crash risk factors as motorists who drive sober and with attentive driving behaviors. Contributing factors related to all Kentucky motorcycle collisions in 2018 involved:

Other crash variables that cause a motorcycle to crash include uneven pavement, weather, unsealed patches, potholes and unkept roads, slick surfaces, and distractions from passengers. And, motorcyclists should always watch out for cars and trucks that are changing lanes. Pay special attention to turn signals, wheels, sudden movements, and other drivers who may be motionless in the seat, as they may be distracted.

An estimated 122,360 motorcycles are registered in Kentucky each year. It’s important for these riders, no matter their skill level, to strive for greater safe motorcycling awareness and to have the proper bike training, as well as rid any negligent driving habits such as inattentive driving and speeding before getting on their bike.

How Drivers Can Avoid an Accident with a Motorcyclist

Unfortunately, most drivers aren’t always on the lookout for motorcycles. But because all drivers play an important role in reducing their individual accident risk, everyone who operates a motor vehicle should know to share the road with motorcycle drivers and their passengers. To prevent both crash injuries and the tragic road fatalities involving motorcycles, the Kentucky Governor’s Commission on Motorcycle Safety and Education asks all drivers to:

Despite taking all safety precautions, motorcycle accidents are going to happen, and lasting injuries and tragic fatalities will still occur each year. But we can all do our part to be better prepared for sharing Kentucky roads with motorcycles and focus on reducing our own accident risk by following this suggested advice.

Watch: How Much is My Accident Case Worth?