Home / Blog / How Holiday Driving and Reckless Driving Are Connected

How Holiday Driving and Reckless Driving Are Connected 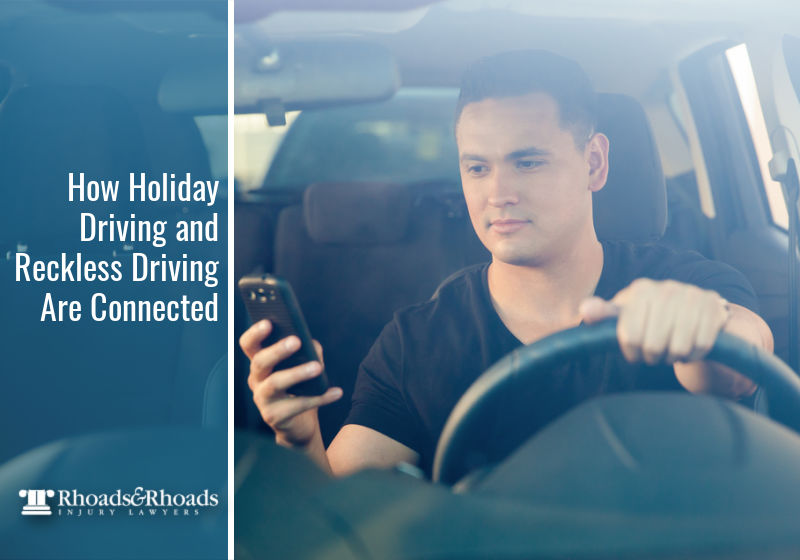 Although there’s much to love about the holidays, there’s a direct link between the holiday season, reckless driving, and serious traffic accidents.

In Kentucky, reckless driving is a broad term that refers to different unsafe driving behaviors, such as driving while distracted, excessive speeding, driving while under the influence of drugs or alcohol, and taking dangerous maneuvers. Essentially, driving recklessly means that a person disregards the safety of others on the road.

Tragically, reckless driving is a serious problem during the holidays, and there’s a notable increase in fatal accidents on America’s roads caused by drinking and driving and other forms of reckless driving.

Why There Are More Wrecks During the Holidays

One of the reasons why it’s far more common for people to wreck near holidays — even non-winter holidays, such as Memorial Day — is because there are far more drivers on the road. The winter season has multiple holidays in which people travel long distances including Christmas, Kwanzaa, Hanukkah, and New Year’s. AAA stated that one-third of Americans travel during the holidays, most of whom drive to their destinations.

Additionally, many people attend holiday gatherings and run errands preparing for the festivities, resulting in even more drivers on the road. More cars on the road mean that there’s an increased risk of traffic accidents.

This is all coupled with the fact that roads are often less safe in wintertime due to inclement weather. Snow, sleet, and ice make the streets more dangerous for drivers, and many vehicles are unequipped to handle the winter conditions. Drivers sometimes fail to anticipate the slick roads, leading to rear-end collisions. It’s important for drivers to equip their vehicles with optimal tires, and they should top off their wiper fluid and antifreeze.

In addition to road hazards and more traffic, holiday driving is dangerous due to reckless drivers.

As mentioned above, there are far more cars on the road during the winter, causing road congestion. Road congestion often means that drivers fall behind schedule and may try to make up for their lost time by speeding and taking dangerous maneuvers. They may swerve in and out of lanes or pass vehicles illegally, and their dangerous actions can cause a serious or fatal accident.

Another reason why drivers take dangerous maneuvers is because of road rage, an unfortunately common occurrence. It’s no secret that the holiday season can be stressful, and with that added stress and road congestion comes the tendency for drivers to become frustrated at the wheel. An angry driver may make thoughtless decisions based on their emotions that endanger others’ lives and their own lives.

As with the non-winter months, drivers frequently endanger others by driving while distracted. Types of distractions include talking or texting on the phone, eating, adjusting the radio, and handling a navigation device.

Additionally, families and groups often travel with one another during the holiday season, and passengers can cause drivers to become distracted at the wheel.

There is a notable increase in drinking and driving during the holiday season, especially around New Year’s Day. According to the National Highway Traffic Safety Administration (NHTSA), 285 people were killed in drunk-driving-related accidents near Christmas and New Year’s in 2018 alone. That year, nearly one-third of all fatal accidents involved a drunk driver.

When it comes to 2022, the website MoneyGeek analyzed previous holiday drunk driving statistics from the NHTSA and U.S. Department of Transportation and used their findings to project this year’s increase in fatal drunk driving accidents. They projected that road fatalities caused by drunk driving will increase by 116% on New Year’s Day.

The reason why there’s such a notable increase in drinking and driving around the holidays is that there are more social gatherings and parties. From Christmas gatherings to New Year’s Eve parties, alcohol is more readily available and people are expected to drink more.

Although it’s impossible to anticipate every potential road hazard this holiday season, you can reduce your likelihood of being involved in an accident by following these tips:

What if I’m Involved in a Wreck with a Reckless Driver?

If you’re involved in a wreck with a negligent driver, you need to file a claim or lawsuit to recover compensation for vehicle damages and any injuries you may have sustained.

We recommend that you contact a Kentucky car accident attorney as soon as possible after your accident. Experienced car accident attorneys will help you gather evidence and will present your case on your behalf. That way, you can maximize the compensation you can recover for damages, which may include medical bills, lost wages, pain and suffering, loss of future earnings, and more.

For expert car accident lawyers in Owensboro and Madisonville, Kentucky, contact Rhoads & Rhoads Attorneys at Law. Get a FREE case evaluation today by calling 888-709-9329 or by clicking here.