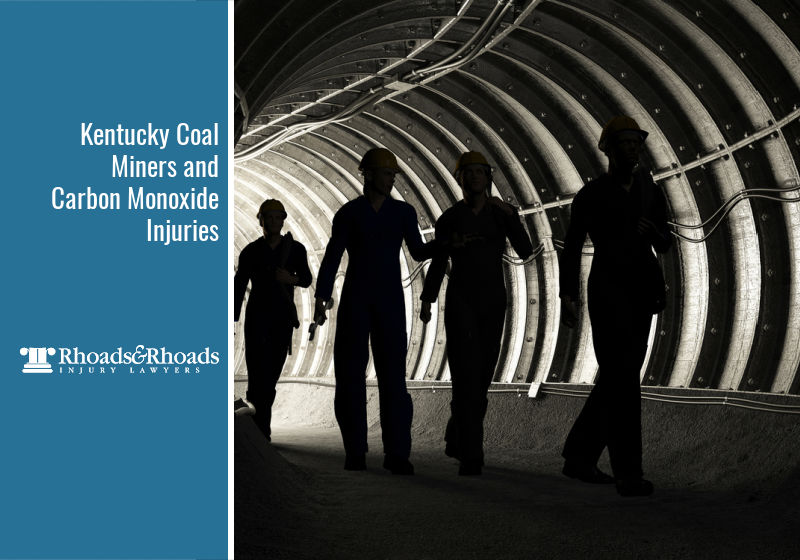 Coal remains a significant component of the Commonwealth’s economy, and many of us have families and friends employed by the industry. In 2006, three of the five miners killed in an explosion in a Kentucky coal mine survived the initial blast but died of carbon monoxide poisoning. Our personal injury attorneys at Rhoads & Rhoads were reminded of the tragedy with the recent news that nearly two dozen coal miners in southwest China died from the same terrible experience in late 2020. The Chinese miners became trapped and soon after died when excessive levels of carbon monoxide began to seep into the air.

Carbon monoxide (CO) is a poisonous, colorless, odorless, and tasteless gas and a common industrial hazard that employers – such as mining companies – should be aware of so that workers have reduced exposure. When CO poisoning is present, it can be either be reversed if detected and treated in time or, in some cases, fatal. For those who recover, acute poisoning may permanently damage the parts of the body, such as the heart and brain. According to the Occupational Safety and Health Administration (OSHA), to reduce the chances of CO poisoning in the workplace, employers should take the following actions:

OSHA also says if employees are working in confined spaces where CO is suspected or likely to develop after an unexpected incident, the group must ensure that its workers have a plan to stay safe. Kentucky coal miners are no stranger to hazardous worksites and unsafe environmental exposures, but employers who choose to enforce safety regulations lessen those risks.

Coal Workers Have the Right to Safe Working Conditions, Training, and Filing Complaints

In Western Kentucky, coal production is present in Union, Hopkins, Muhlenberg, and Daviess counties in underground and surface mines. According to the most recent numbers published by the Kentucky Energy and Environment Cabinet Department for Energy Development and Independence, on average:

Employees are encouraged to reduce the chances of CO poisoning in the workplace by reporting any situation to their employer that might cause CO to accumulate, and also disclose any personal experiences of dizziness, drowsiness, or nausea. If you are an employee and suspect CO poisoning, avoid overexertion, and leave the contaminated area immediately. Report the incident and call 911, and seek medical services. Be sure you tell your doctor that you may have been exposed to CO at your worksite.

All Kentucky workers, especially our hard-working coal miners, have the right to working conditions that do not pose a risk of serious harm. Under the law, they can report an injury or raise health and safety concerns without retaliation from their employer. And while coal workers face harsh and hazardous risks each day including CO poisoning, exposure to respirable coal mine dust can cause coal workers’ black lung disease and fatal and irreversible injuries caused by contact with equipment, machinery, or in transportation incidents can also occur.

The Rhoads family is from Western Kentucky and has remained committed to supporting the coal worker community for decades. Jerry Rhoads founded Rhoads & Rhoads in 1974 and the majority of his practice was devoted to representing the United Mine Workers’ of America (UMWA) and injured coal miners, as well as black lung claims. While the firm now handles personal injury and workers’ compensation cases of all types, our experienced attorneys continue to help injured or sickened Kentucky coal workers and their families.

Lives can easily be turned upside down after a work injury, but the Rhoads & Rhoads team can help provide an outcome and resolution to make things a bit easier. If you have become ill or lost a loved one due to a coal mining-related injury or disease, we are here to help. Call us today at 888-709-9329 to schedule a risk-free consultation.